Kelek was a Swiss watch manufacturer, and is now belonging to the manufacturer Breitling.

Founded in 1896 in the well-known watch town La Chaux-de-Fonds, Kelek initially produced complicated watches such as bag chronographs, mainly for military personnel. Later the company, well-known due to their high mechanical wristwatches, made itself a name particularly as a specialist for complications.

Back in the sixties, the company director and master watchmaker Gabriel Feuvrier came to know Willy Breitling, and soon a close cooperation resulted. This was intensified in the following years and Kelek was instrumentally involved in the development of some complications for Breitling. In 1997, this cooperation culminated in a "corporate marriage". Since 2002 this is called "Breitling Chronométrie".

Before there had also been collaborations with the manufacturer Chronoswiss, which had led to joint models. 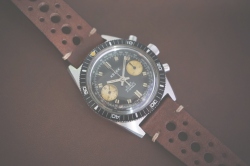