In 1926 Ebauches SA was created by three major watch companies (A. Schild AG, Fabrique d’Horlogerie de Fontainemelon and A. Michel AG), as a holding company for Swiss watch movement manufacturers. The purpose of this merger was to bring order in this chaotic industry, and to keep the prices of watch movements from falling any further. By 1951 Ebauches SA had bought as many as 75 movement manufacturers! Eventually in 1985 most of the companies that became part of Ebauches SA were bought into the Swatch Group under the ETA division.

In 1970 daughter company Ebauches Electroniques SA was founded, and that company filed in 1972 for the trademark name Memosail. 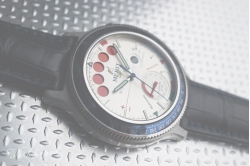