The company began its history when, in 1887, H. V. Degoumois was established in La Chaux de Fonds, Switzerland. The brand name of Avia was registered either in 1910.

The company was a pioneer in the production of wrist watches, the years of the Second World War mark an important turning point for Avia when the American market became vital for the firm's existence and advances. During World War 2, the main US distributor of Avia watches was M. A. Mead & Co. in Chicago, and Mead marketed Avia-made military watches, including a military timer that was utilized by air crews searching for submarines. This watch incorporated a very accurate timer and stop watch. Mead watches manufactured by Avia were sometimes marked "AVIA" but also were given the name "Boulevard", and the watches contained movements made by the Avia Watch Factory in Switzerland. 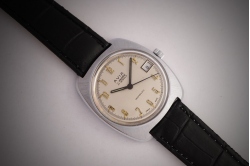