Sicura is one of the most important brands in the world of large, vintage and affordable watches.

The company was owned by a Théodore Sfaellos and when he died in the beginning of the 1960s Sicura was taken over by his son-in-law Ernest Frédéric Schneider.
Ernest Schneider was born in 1921 and thus was around 40 years old when he took over Sicura. He had been in the Swiss Army since the age of 20 and ended as an officer in the 10th Brigade.

Ernest Schneider became the driving force behind Sicuras growth and a maker of affordable watches that followed the latest trends. The watch cases were often brass plated metal with standard pin-lever movements to keep production cost and prices low.

Sicura originated from a company called "Joh. Gobber, Horlogerie" established in 1939. And then supposedly in 1951 the company was listed as "Sicura, Joh. Gobber" and finally the 2 May 1955 the company can be found in the Swiss Handelsregister as "Montres Sicura SA".


The link to Breitling occurred in 1979, when Breitling was closed due to financial problems. Ernest Schneider saw the potential of this high quality heritage brand and hoped to revive the Breitling name. In the event, having bought the trade names, Breitling and Navitimer, Ernest Schneider and Sicura went on to become the new owners of Breitling in 1993, and eventually Sicura morphed itself out of existence. Ernest Schneider was to remain president of Breitling until his death in 2015..

Interestingly, although Sicura is considered one of the smaller vintage watch companies, by 1975 it was a fairly large concern with Sicura SA then operating four watch assembly plants and a jewel factory, and employing about 450 people.

As a consequence of the quartz crisis the watch company Breitling suspended operations in 1978, laidoff all workers and sold their assets to the highest bidders - Sinn bought completed / partially completed watches and Ollech & Wajs bought the machinery and unassembled parts. And in April 1979 Ernest Schneider from Sicura signed an agreement with Willy Breitling to buy the right to the names "Breitling" and "Navitimer". 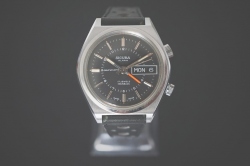