The Racine family was well-known in watchmaking as early as the 1700's. They were French-speaking and lived in the Swiss Jura as well as Lamboing in Bern Canton and Grenchen in Solothurn Canton. There were many watchmaking businesses with a Racine family member involved, though only a few actually used the family name. One, Jules Racine Sr., had registered the family name as a watch brand.

Therefore, when Ariste Racine and his wife Emma Blatt began their Manufacture d'Horlogerie Ariste Racine in La Chaux-de-Fonds in 1913, they were unable to sell watches under their own name. Emma suggested reversing the family name, and the Enicar brand was registered on January 6, 1914. Ariste Racine was a small operation at first, operating out of the family sunroom before adding a small radium laboratory and moving to his mother's house in Longeau (now Lengnau) in the Bern Canton.

Ariste Racine and company had a major hit with a teardrop-shaped pocket watch which had a second aperture for a compass or photo. These were exported around the world and were especially popular in Germany, Russia and China. Soon, Ariste's brother Oskar Racine joined the company and they opened a much larger factory in Longeau. They began producing their own "AR" movement family, though many products continued with other movements, notably those from Adolph Schild.
Enicar S.A.

Nearly all of the products of the Ariste Racine company used the Enicar name by the 1920's, though they also held trademarks on Alprosa, Chromicar, Chrono M, Etsira, Longeau, Savillon, Swisbaby, Swisboy, Sykos, and Teddy. The company became a Société Anonyme in 1932 and took on the name of their main brand, Enicar S.A. It remained a family firm, however, with the children and cousins taking control once Ariste and Emma left in 1943. Beginning in the 1930s, Enicar enjoyed robust distribution in Asia, becoming well known in China.

After World War II, under the leadership of Ariste Racine, Jr., Enicar modernized and expanded production. The company boasted that their movements were cleaned in a laboratory, leading to the Ultrasonic brand found on many watches in the 1950's and 1960's. The company had begun producing their own movements by then, with as many as 70,000 produced annually in the early 1950's. Their movements were quite accurate as well, with Calibre 1010 winning chronometer certification by the Neuchâtel Observatory for the first time in 1954. Enicar also developed a water-resistant case with an unusual bayonet back, introducing it as the Seapearl in 1955.

Enicar's own automatic movement, Calibre 1125, appeared in 1959. The company also used movements from other manufacturers, including Valjoux, Adolph Schild, and Lemania.

As was typical in the late 1950's, Enicar began supplying watches to mountain climbers and other adventurers as a marketing exercise. Enicar Seapearl watches accompanied the Swiss expedition to the top of Lhotse and Everest in the Himalayas in 1956, to much fanfare. Enicar seized on this publicity by branding their "explorer" watches "Sherpa" later that year. Over 100 different Enicar Sherpa watches were introduced in the following decade, becoming their most famous brand. Enicar also proved the ruggedness of their watches by attaching a Sherpa Ocean Pearl to the keel of the sailing ship Mayflower II as it crossed the Atlantic in 1957. This led to the creation of a family of Sherpa Dive watches.

Many Sherpa watches were rebranded with the Star name in the 1960's as Enicar modernized their designs. They were involved in the electrification of wrist watches as well, introducing an electro-mechanical watch in 1961 and introducing one of the first Swiss quartz watches in 1970. Enicar had been part of the CEH Beta 21 project and used that movement. But the quartz crisis was not kind to Enicar, which was not absorbed into the Swiss conglomerates that became Swatch Group.
Enicar Today

On November 13, 1987, Enicar was declared insolvent. The remaining cases and movements were sold to Gerd-Ruediger Lang and became the foundation of his firm, Chronoswiss.

In 1988 the brand name was purchased by Wah Ming Hong Ltd. of Hong Kong. Founded by Lee Wai-Lee, Wah Ming Hong had been Enicar's distributor in China since the 1930s. The brand had enjoyed much success in the China market, and this is their focus today. The brand advertises as "Enicar of Switzerland" and maintains an address in La Chaux-de-Fonds though the exact circumstances of production are unknown. Enicar is said to be one of the top 10 imported watch brands in China today, though the brand lacks distribution outside of Asia. Most current products use quartz movements but a few mechanical watches are still produced, most with Sellita movements. 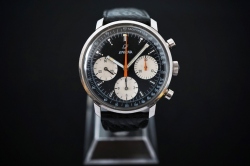