Breitling SA (German pronunciation: [braɪtliŋ]) is a Swiss luxury watchmaker based in Grenchen, Switzerland. The company was founded in 1884 by Léon Breitling in Saint-Imier. Breitling is known for precision-made chronometers designed for aviators.

History
Astronaut Scott Carpenter wearing a Breitling Cosmonaute inside the Aurora 7 spacecraft on May 24, 1962.

Breitling SA was founded in Saint-Imier, Bernese Jura by Léon Breitling in 1884. Léon Breitling passed away in 1914, passing the business on to his son Gaston.

Ernst Schneider bought the company from the founding Breitling family in 1979 and it was owned by the Schneider family until 2017. Ernst's son, Theodore Schneider, sold the majority stake (80%) in Breitling to CVC Capital Partners for over $870m. The Schneider family still retains 20% control of Breitling. Historically, Breitling sourced movements from suppliers such as Valjoux, ETA, and Venus rather than producing movements in-house. In 2009 Breitling developed the B01, an in-house self-winding, column wheel chronograph movement, used in the Breitling Chronomat 01 and subsequently Navitimer 01.
Products

The company fits certified chronometers in all models. Watches are usually marketed towards either diving (SuperOcean) or aviation (Navitimer). Aviation models such as the Navitimer offer aviation functions largely as complications, since their function in aviation has largely been replaced by modern electronic instruments. The styling of Breitling watches is characterized by polished cases, bracelets and large watch faces which are designed to improve readability. Many models have an automatic winding mechanism that is purely mechanical (i.e. using no electronic components) and frequently have complications.

In the 1940s, Breitling added a circular slide rule to the bezel of their chronograph models for use by aircraft pilots. This became the famous Navitimer model. During the 1950s and 1960s, a version of the Navitimer was offered by the Aircraft Owners and Pilots Association with the AOPA logo on the dial. In 1961, Scott Carpenter, one of the original astronauts in the Mercury space program, approached Breitling with the idea of incorporating a 24-hour dial instead of the normal 12-hour dial. This was needed because of the lack of day and night during space travel. Breitling complied, and produced the 24-hour Navitimer which Carpenter wore on his 1962 space flight. Breitling then proceeded to produce the 24-hour version as the so-called Cosmonaute Navitimer - under both Breitling and AOPA logos. By the 1990s, the use of logos for military aviation customers had also expanded to include various unit logos on the Aerospace and Chronospace Auto models, primarily those of squadrons and usually part of a group purchase by the pilots and navigators/flight officers of that particular unit.
Emergency

The Breitling Emergency watch contains a radio transmitter for civil aviation use which broadcasts on the 121.5 MHz distress frequency and serves as a backup for ELT-type airborne beacons. For military users, the Emergency has a miniaturized transmitter operating on the 243.0 MHz military aviation emergency frequency. Under normal conditions—flat terrain or calm seas—the signal can be picked up at a range of up to 90 nautical miles (167 km) by search aircraft flying at 20,000 feet (6,000 m). Since 1 February 2009, the Cospas-Sarsat Satellite System has not monitored the 121.5/243.0 MHz frequency; however, the signal transmitted by the Emergency was never strong enough to be picked up by satellite, and Breitling has announced that, as these frequencies will still be monitored by aviation, particularly during the localization phase of a rescue attempt, there are no plans to modify the signal's frequency.

The Emergency is available for customers who do not hold a pilot's licence, but they must sign an agreement stating that they will bear the full costs of a rescue intervention should they trigger the distress beacon.

The model was heavily advertised by the Breitling Orbiter 3—both Brian Jones and Bertrand Piccard were wearing the Emergency. Breitling sponsored the Orbiter 3 project, which in 1999 became the first balloon to completely orbit the Earth without landing. A commemorative Orbiter 3 version of the Emergency watch was subsequently produced, with a production run of 1,999.
Emergency II

In April 2013, Breitling announced a new version of the Emergency watch. This upgrade transmits on the 121.5 MHz frequency, but adds the 406.04 MHz signal that is monitored by satellites. It has a separate, rechargeable battery for the transmitter.
Breitling for Bentley

As part of 10th anniversary of a Breitling–Bentley Motors partnership, the Bentley B04 GMT, B05 Unitime and B06 (based on COSC Certified Breitling Calibre B04, B05 and B06 respectively) were produced.
Versions
Breitling Aerospace Avantage with Titanium case.
Breitling Navitimer wristwatch with circular slide rule.
Breitling Emergency wristwatch.
Breitlig Chronomat Blackbird.
Sponsorship
Aero L-39 Albatros aircraft of the Breitling Jet Team perform at RIAT Fairford, England

Breitling sponsors aeronautical endeavors, including the first circumnavigation of the globe by balloon (Breitling Orbiter), the fixed-wing jet pack flights of Yves Rossy, aerobatics teams including the Breitling Jet Team and Breitling Wingwalkers, and the Reno Air Race. Breitling was a sponsor of Team Bentley during their Le Mans 24 Hours campaign, running from 2001 to 2003. To commemorate this, it created the Breitling Bentley 24 Le Mans Watch.
In popular culture
In the 1965 James Bond movie Thunderball, Bond is given a Breitling Top Time by Q which contains a geiger counter that enables Bond to track down two stolen nuclear warheads. After the movie was filmed, the watch disappeared and later resurfaced in a car boot sale in England in 2012 where it was bought for GB£25. It later sold at Christie's auction house for over GB£100,000 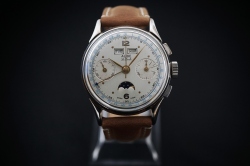 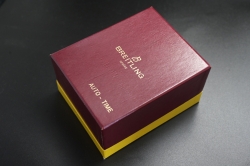 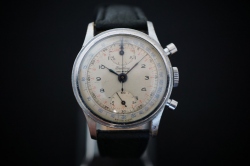